Copyright notice: If you want to copy this walkthrough for your own site, please ask permission BEFORE you do so and place the following code on your site at the top of each walkthrough page:

This is the part of the game that gave me the most nightmares...you have hitched a ride on the small sub from the last level. You are deep underwater with no tank and desperately need some air! Firstly, do a roll and look for the barrels and other debris on the seabed. Follow these until you come to a shipwreck. You have to be quick, because there are a couple of hungry sharks after you!

At the far left corner of the wreck you can see a rusty anchor sticking out...get behind this and swim down through an opening there. You can surface for air here and you can get the sharks with your harpoon gun if you want all of the kills. When you're ready, swim through an opening underwater into another room. Swim upwards and to the left through another opening, then from that room do the same again to come anther room with a trapdoor at the bottom. At the far left corner is a lever...pull this to open the trapdoor and swim through it to the next area where you can surface. Phew!

You are now inside the shipwreck...When you've got your breath, swim down past the stacked crates through a small opening on the right wall. Climb out and follow the passage to a lever. Pull this and you'll hear the water draining out of the room you've just left.

Make your way back and use the crates to get to an opening high up in the wall and pull yourself up through it. Look into the room below...there's a very tempting object at the other side, but to get there you are going to have to avoid the trapdoor in the center of the room. Drop down, cue some scary music and a weapon-wielding baddie...deck him and pick up the shotgun shells he drops, then you can go for the Silver Dragon.

You can probably hear someone walking around below...there are two thugs waiting for you, so drop down through the trapdoor* to take care of them and pick up the small medipack and harpoons they drop. Climb up to the low block in the center of the room (screenshot), then run, jump and grab to the opening on the left.

Okay, this next area is a killer...you find yourself in a large, square hallway with a timed burner puzzle. It's timed precisely, so there's little margin for error.Below is a basic map** of the area...it's not to scale, but it may help as a guide: 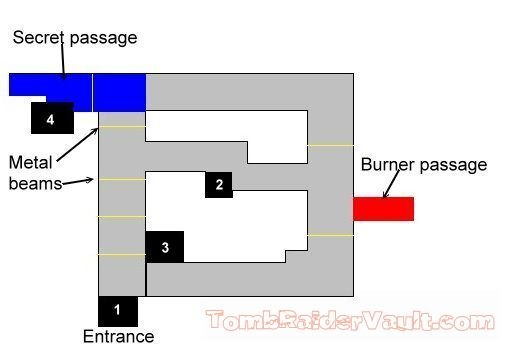 The first thing to do when you enter the area is to get your second secret. It's in the water outside the area, and it's timed, but fairly simple. As you enter the area, there is a lever to the left on the wall next to the door. Pull this, roll, run forward jumping over the metal beams, turn left, jump over another one, then jump through the doorway before it closes. Jump into the water beyond and swim forward then left to pick up the Jade Dragon. Swim back the same way, avoiding the shark and 3 barracudas in the water, or you can try and get them with your harpoon if you want all kills. Sometimes you can climb out and get the barracudas with your pistols, but it can take a long time. You may need to keep jumping into the water to attract them, then climb out to shoot.

Now for the killer burner puzzle...run down the corridoor, turn right, then left down a small, dark passage. Climb up into the doorway on the right and pull the lever. Drop down, run right, then right again, past the burners, remembering to jump over the pipes on the floor. Turn right again and jump or climb into the room at the end. The lever inside starts a timer and turns off the first two burners. Run out of the room, down the passage, turn left, then left at the end, into the burner passage and pull the first lever there. This opens another door elsewhere. Sideflip left 3 times to get back into the passage. Lara is safe for now, so there's no hurry for the next little bit. :-) Run down the passage, turning left at the end. Make for the now open door to the left of the secret door you entered earlier. Before you pull the lever inside, save your game as this is where the hair-rasing timed run begins!

This lever turns off burners three and four, so you now need to pull it and make your way back to the first lever to turn off burners one and two. Run out of the room, turn right, running and jumping over the pipes, then make a series of right turns until you can jump into the room with the first lever. Pull it, press the look button to get Lara's view back, roll, jump out of the room, turn left, then left at the end, then jump over the pipe and into the burner passage. At the end of the passage is a lever...once you've reached that, you're safe from the burners! (Video)

Okay, you may think you can relax now...wrong! There's killer timed swim ahead, so go grab yourself a stiff drink (or a cuppa!) and steady your nerves before continuing.

You can see a small body of water in the next room. There's a barracuda in there...you can either swim past him or jump in to draw him out, then climb out to kill him. Whatever you do, you need to swim under the water and up through a trapdoor. Keep swimming up through two more openings and look for a lever in the top room near floor level. Pull this to open another door right the way back down...swim down to pull this to open the top hatch so you can climb out! You'll also notice the Gold Dragon near the bottom lever, along with four sets of harpoons...you can either get this now or come back for it when you've got your breath back. Three more hungry barracudas attack after you pick up the dragon, so be careful!

Climb out and follow the passage to a large room filled with dirt. Walk around the room to find an opening in the floor close to the wall. Drop down into another similar room. High up in the room is an opening (screenshot), and to the left of that is a movable box. Pull it under the opening in the wall and climb up through it. Pull the lever in there to fill the room with even more dirt from the one above.

Drop back down into it and make your way over to the two ladders you can see on the left wall (screenshot). Stand with your back to the left-hand side one, then jump forward to grab the ledge, pull up, and then climb through the opening in the ceiling of the next room (screenshot). Pull the lever in here to flood a room nearby. Climb back down and this time climb through the opening above the right ladder. In the next room, look for the rectangle shaped opening high up on the wall...climb through it into another room with a lever. Pull this to open an underwater door in the room you just flooded.

Climb back down to the bottom room again and look for a small, square opening high up on the wall. Climb through this and follow the passage to reach the flooded room. There is a frogman in the water, but he may not show himself until you jump in. Either get him with your harpoon, which is quite tricky, or wait until you hear him breathing and climb back out to get him in relative safety.

The next part is also tricky, so save your game before you proceed. Jump into the water and through the underwater passage at the bottom. Follow it until you can surface, and do so quickly as there are two thugs waiting for you. One has a shotgun and will start shooting before you can climb out. Deal with him and the one with the club and pick up their large medipack and shotgun shells, as well as some harpoons lying around.

Pull the lever on the wall and exit the level through the door that opens.

If you missed anything while playing the PC version, here is the savegame file with all kills, pickups and secrets.

*There's apparently a bug in the game which allows Lara and the gun-wielding thug to shoot at each other through the trapdoor.
** Map created with the aid of Diagram Designer

Send us feedback about this wakthrough